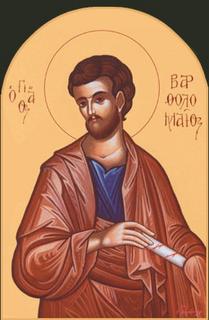 Bible Trivia: What was the Apostle Bartholomew's other name?

From the Catholic Encyclopedia:

Many scholars, however, identify him with Nathaniel (John 1:45-51; 21:2). The reasons for this are that Bartholomew is not the proper name of the Apostle; that the name never occurs in the Fourth Gospel, while Nathaniel is not mentioned in the synoptics; that Bartholomew's name is coupled with Philip's in the lists of Matthew and Luke, and found next to it in Mark, which agrees well with the fact shown by St. John that Philip was an old friend of Nathaniel's and brought him to Jesus; that the call of Nathaniel, mentioned with the call of several Apostles, seems to mark him for the apostolate, especially since the rather full and beautiful narrative leads one to expect some important development; that Nathaniel was of Galilee where Jesus found most, if not all, of the Twelve; finally, that on the occasion of the appearance of the risen Savior on the shore of the Sea of Tiberias, Nathaniel is found present, together with several Apostles who are named and two unnamed Disciples who were, almost certainly, likewise Apostles (the word "apostle" not occurring in the Fourth Gospel and "disciple" of Jesus ordinarily meaning Apostle) and so, presumably, was one of the Twelve. This chain of circumstantial evidence is ingenious and pretty strong; the weak link is that, after all, Nathaniel may have been another personage in whom, for some reason, the author of the Fourth Gospel may have been particularly interested, as he was in Nicodemus, who is likewise not named in the synoptics.