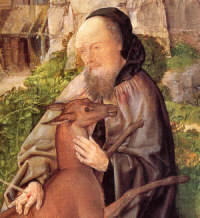 Every now and again there are saints whose lives are just that interesting...

According to tradition, St. Giles was born at Athens, Greece, and was of noble
extraction. After his parents died, he fled from his fatherland to avoid
followers and fame. He went to France, and in a cave in a forest near the mouth
of the Rhone he was able to lead the life of a hermit. Legend has a hind came
everyday to his cell and furnished him with milk. One day the King's hunters
chased the hind and discovered St. Giles and his secret hermitage. The hunters
shot at the hind, but missed and hit Giles' leg with an arrow, which kept him
crippled the rest of his life. He then consented to King Theodoric's request of
building a monastery (known later as "Saint Gilles du Gard") and he became its
first Abbot. He died some eight years later towards 712.

In
Normandy, France, women having difficulty becoming pregnant would sleep
with a picture or statues of the saint.

In England,
churches named for St. Giles were built so that cripples could reach them
easily, and he was also considered the chief patron of the poor. That in his
name charity was granted the most miserable is shown from the custom that on
their passage to Tyburn for execution, convicts were allowed to stop at St.
Giles' Hospital where they were presented with a bowl of ale called St. Giles'
Bowl, "thereof to drink at their pleasure, as their last refreshing in this
life."

St. Giles is included in the list of the fourteen "Auxiliary
Saints" or "Holy Helpers". These are a group of saints invoked because they have
been efficacious in assisting in trials and sufferings. Each saint has a
separate feast or memorial day, and the group was collectively venerated on
August 8, until the 1969 reform of the Roman calendar, when the feast was
dropped.