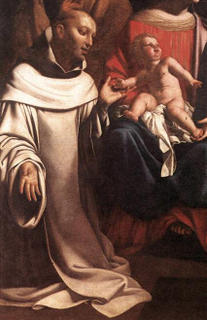 Founder of the Carthusians, patron of the possessed.

I have a good friend who is a Carthusian. We attended college together some years ago and I had lost touch with him after that. Recently I caught up with him after I had mentioned him in a book that I wrote called The Power of the Cross. Turns out he was carrying a cross way back then that I was not aware of at the time.

Now ordained a priest for his order, he told me that after college his life went in a downward spiral of drugs, alcohol and sex--homosexual sex. Now, even after he told me that he was/is a homosexual, I found it hard to believe.

The drugs and alchohol were an attempt to flee from the path he knew that he must trod and in sobriety he set out once more for the house of the Father.

He is a good man, a holy man, a chaste monk. I believe and he believes he is where God wants him to be, in the order that St. Bruno founded. Pray for him today and the many like him who have restless hearts until they rest in God.
Posted by Amy Welborn at 4:44 AM