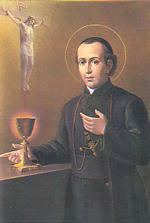 Looking for a powerful intercessor? Try this great saint--the founder of the Precious Blood Community.

From the Missionaries of the Precious Blood:

Gaspar began his work by proclaiming "peace through the blood of the cross." He called people to reconciliation - to a restored right relationship with God and with God's people. In order to continue his mission of preaching missions and retreats, he gathered other diocesan priests together to spread the message beyond the city of Rome.

On August 15, 1815, he established the Missionaries of the Precious Blood, in Giano, Italy, where an abandoned monastery was given to the community in order to help it begin the work of proclaiming God's saving love through the precious blood of Jesus. Gaspar continued to bring men together to help build up his small community of preachers. Eventually the community would have both priests and brothers, who worked together to reach out to people who needed to hear some good news.

Gaspar was especially famous for his preaching to the bandits in the small towns of the Papal States. His preaching inspired many to turn away from lives of crime and brought hope to areas heavy with crime.

Gaspar died in Rome, December 28, 1837. He was declared a saint by Pope Pius XII, June 12, 1954. His feast is celebrated in the City of Rome and by members of the Missionaries of the Precious Blood on October 21 - the anniversary of the day he preached to the Archconfraternity of the Precious Blood for the first time.