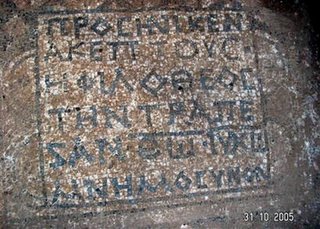 Dates back to the third century, at the Biblical site of Armageddon! Here is a picture of the inscription found:

MEGIDDO PRISON, Israel - Israeli prisoner Ramil Razilo was removing rubble from the planned site of a new prison ward when his shovel uncovered the edge of an elaborate mosaic, unveiling what Israeli archaeologists said Sunday may be the Holy Land's oldest church.

The discovery of the church in the northern Israeli town of Megiddo, near the biblical Armageddon, was hailed by experts as an important discovery that could reveal details about the development of the early church in the region. Archaeologists said the church dated from the third century, decades before Constantine legalized Christianity across the Byzantine Empire.
Posted by Amy Welborn at 5:30 AM