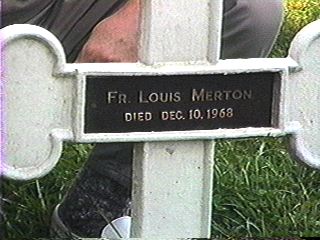 I thought of Merton on three different occaisions today, at once thinking even that the success of my How-To Book of the Mass is due to the Merton quote at the very beginning of it.

Then later he came to mind again, and I thought didn't he die around this time of year? Turns out today was the day, thirty-seven years ago.

I have prayed at his grave at Gethsemane many times and offer a prayer this evening...you might do the same--no doubt he has touched your life as he has mine...we owe him!
Here is a Merton quote:

Secular life is a life frantically dedicated to escape, through novelty and variety, from the fear of death. But the more we cherish secular hopes, the more they disappoint us. And the more they disappoint us, the more desparately do we return to the attack and forge new hopes more extravagant than the last. These too let us down. And we revert to the insufferable condition from which we have vainly tried to escape...

...In the sacred society, on the other hand, man admits no dependence on anything lower than himself, or even "outside" himself in a spacial sense. His only Master is God. Only when God is our Master can we be free, for God is within ourselves as well as above us. He rules us by liberating us and raising us to union with Himself from within. And in so doing He liberates us from our dependence on created things outside of us.

From The Inner Experiene: Notes on Contemplation

An interesting note, this book was just published in 2003. It in a sense was a "lost" Merton book that had languished in a convent where proof reading was taking place and Merton died before it could be returned to him. The sentences starting with "And" was a Merton style that was often edited out but in the quotes above remain because of the reverence that Merton commands in 2003.
Posted by Amy Welborn at 6:17 PM