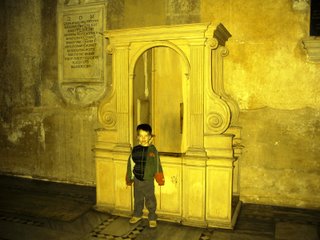 Amy and Katie went shopping after we returned from St. Peter's and the brothers and I rested. At some point we set out again for a taxi, this time to take us to Santa Sabina where the Pope had said Mass on Ash Wednesday. The driver (the only one like this) was very anti-Vatican and almost immediately launched into an attack on the Church's money etc.--all in broken English.
First we made our way to Santa Sabina, which was right where the cab driver let us out. We saw the orange tree planted by St. Dominic through the hole in the door.
Next we visited Sant'Alessio all'Aventino, I'll have pictures of some of these places as soon as blogger's picture poster thing starts working again.The shrine of St. Alex under the staircase was very interesting. There were several young women gathered at the doorway of the Priory of the Knights of Malta, we waited our turn then looked through the keyhole at St. Peter's Basilica--very impressive. There were also parks and gardens that we walked through in this area before heading to Sant' Anselmo all'Aventino the Benedictine monastery. There was a wedding going on in the Church, so we weren't really able to see much there, but did spend some time in the gift shop which had an interesting collection of all things Benedictine from different monasteries around Europe. The monk in charge wasn't too keen on children being in the store though.
We then walked down the beautiful path Clivo D. Rocca Savella toward Santa Maria in Cosmedin. We stopped at a convent of the Daughter's of Charity to ask directions from the porteress, which she happily gave. Unfortunately the Church was closed when we arrived, but a crowd was gathered to view the Bocca della Verità, 'Mouth of Truth'.
From here we caught a cab and returned to St. Peter's where Monsignor Stephen Bosso had said he would meet us for dinner at the obelisk. We met up and went to a place where we had eaten on the previous Sunday evening. Amy and the kids left the meal when they finished and Steve and I caught up for a few hours more.
Evening came the Seventh Day.
Posted by Amy Welborn at 10:49 AM