From Poland Will Come the Spark

One year ago today...

I read these words back in 1978 from St. Faustina's diary that were spoken to her by Jesus. They were published before anyone had even thought of a Polish pope, but somehow one knew that Jesus was referring to this pope and twenty six years later the spark has spread it's fire throughout the world and the devotion to the Divine Mercy is one of the most popular.

I wrote to the pope back in those early days and received the standard reply from a Monsignor that the Holy Father had received my message and sent his blessings. Enclosed in the letter was a small crucifix. What I had written the pope was the following message from teh Gospel of John in Polish:

Truly, truly, I say to you, when you were young,
you girded yourself and walked where you would;
but when you are old,
you will stretch out your hands,
and another will gird you and carry you where you do not wish to go."
(This he said to show by what death he was to glorify God.)
And after this he said to him, "Follow me."
John 21:18-19

It is Our Lord's message to St. Peter. I was reminded of this today at Mass when the Gospel reading was from John and the verses immediately preceding this passage. When I sent it to the Holy Father those many years ago I did so because I thought of how his embracing of the Petrine office was taking him away from his beloved Poland. But in these last years it has seemed even more prophetic as he is wheeled out and put around.

If indeed he is the spark that was to prepare the world for the Lord's coming what awaits us after his entrance into the Father's Kingdom?

In the middle of the night on February 24/25th on a plane somewhere over the west European cost as light broke through the darkness this passage from St. Faustina's diary entered my mind and the words "write and remind others about this message."

I forgot about it for the most part after the excitement of the days in Rome, but was reminded of it when I prayed at the tomb of Pope John Paul II and then this: 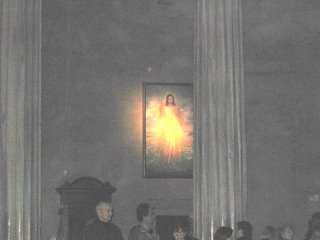 The beautiful Encyclical of Pope Benedict is yet another invitation from the God of Love...

Yet how many of us are mired in judgment--judging and being judged?

Picking up stones to cast at others, while worthy of being stoned?

Lord have mercy on us!
Posted by Amy Welborn at 5:20 AM