New Cardinals of the Church 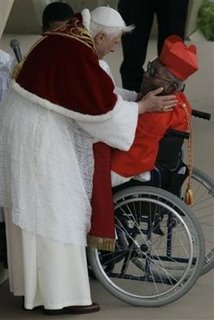 Peter Poreku Dery, archbishop emeritus of Tamale, Ghana is given the sign of peace by Pope Benedict XVI after being made a cardinal. In one of the more shocking commentaries I've heard, the American commentator used this episode to remark and I paraphrase "Isn't it strange to see the pope getting up to aid a cardinal who is bound to a wheel chair as opposed to the pope himself being bound to a chair," (a reference to the late Pope John Paul II).
I would note that the only two cardinals that the pope arose out of his seat to greet (and in this case to make Archbishop Dery a cardinal) were Archbishop Dery and Archbishop Levada--the latter clearly as a sign of the friendship between the two men.
Something that my Rome trip has given me is a new understanding of the churches of Rome, so that in this morning's ceremony when the pope announced to each new cardinal their titular church in Rome, I knew not only what he was saying but also where they are and what they are like.
Here are the new American cardinals and also the new cardinal of Pope John Paul's former See, his secretary: 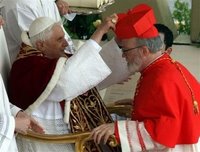