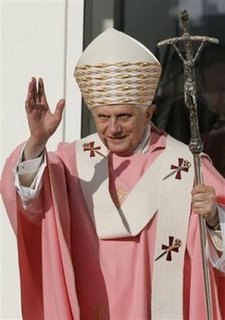 Liturgy check in your parish, what color vestments did your presider wear today?

Pope mentions John Paul's undelivered homily in his, from:

Pope Benedict XVI commemorated his predecessor on Sunday by quoting a passage on Christian love from a homily that the late John Paul II should have recited on April 3, 2005 - a day after his death last year.

"To humanity, which at times appears lost and dominated by the power of evil, egoism and fear, our risen lord offers in gift his love, which forgives, reconciles and opens our heart to hope. It is a love that conquers the hearts and brings peace," said Benedict, quoting John Paul's planned homily.

"It was written in the divine plans that he should leave us on the eve of that day, Saturday April 2, as we all remember. This is why he was no longer able to utter these words, which I want to recall today to all of you," Benedict said while addressing the faithful gathered in a parish in Rome created under John Paul's pontificate.

"In this sort of testament, we are invited to understand and embrace the divine mercy (of God)," Benedict said.