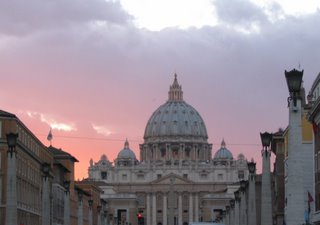 It was raining hard enough that I ran back up the stairs of the apartment to get an umbrella the final morning in Rome. Then I made my way to St. Peter's that now seemed almost like an old habit. A few nuns, also with umbrellas were in line with me. We made our way into St. Peter's. First, I made my way to the tomb of St. Gregory Nazianzen and in doing so found one of the kneelers where the conditions for receiving a plenary indulgence were listed--confession was one of the conditions, so I found an confessor who could hear confessions in English and made mine, then went back to the kneeler and said prayers for the intention of the Holy Father. Then I attended a Mass in Italian at the tomb of Blessed John XXIII. Then a visit to the tomb of Pope John Paul II where I prayed the Joyful mysteries of the rosary. Then to the Blessed Sacrament chapel to pray Morning Prayer. Then a rush out of St. Peter's and back to the apartment. When I got back there, the cab driver was already there (although it was about fifteen minutes before we had told him)...more rush to finish taking trash to a dumpster two blocks away, and then to bring the baggage down and take a final look around. Then through the streets and out of Rome through fogged up windows. That was two weeks ago today, but seems like a distant dream already.
When I took Latin over twenty-five years ago we learned a saying, Roma locuta est, causa finita, "Rome has spoken, the case is finished," meaning that the Pope had given the final word on some case of speculation, after a novena of full days in Rome it means something else to me now--a witness of history, martyrs, relics, art and a even a baby. Indeed Rome has spoken.
Posted by Amy Welborn at 7:15 PM