The Church, Love and Division 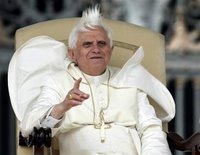 Pope's Angelus which seems like his catechetical series will be based on 1 John, a sort of continuation on his Encyclical but dealing with the more difficult issues, like today's discussion on division, from Asia News Italy:

The Church is “love”, but it is also “truth”: faithfulness to these two features that have co-existed since the times of the Twelve mean that, faced with the danger of losing faith, there is the “clear duty of whoever believes the Church of love, and who wants to live within it, to interrupt communion with he who has distanced himself from the saving doctrine”.

Continuing with his reflection about the mystery of the Church, Benedict XVI addressed 30,000 people who attended the general audience in St Peter’s Square on this windy day. The weather brought forth a joke from Benedict XVI about “wind that could make one think of the Holy Spirit”, of the “service to communion”. Right from the time of the apostles, he said, the community of the disciples “was no stranger to trials, arising above all from clashes about truths of the faith, with subsequent divisions in communion. Just as fellowship in love has existed from the beginning (cfr 1 Jn 1:1ff), so has division taken over from that time: “They went out from us, but they did not belong to us; for if they had belonged to us, they would have remained with us. But by going out they made it plain that none of them belongs to us” (1 Jn 2:19). How great is the danger of losing one’s faith! It is a clear duty of those who believe the Church of love and who want to live within it, to interrupt communion with those who distance themselves from the saving doctrine (cfr 2 Jn 9-11)

The growing Church was “well aware of the possible tensions in the experience of communion”.

But to live in unity and peace, the family of children of God needs someone to watch over it in truth, and to lead it with wise and authoritative discernment: this is what makes the ministry of the Apostles”.