"Son of Germany"--the Pope visits concentration camps in Auschwitz and Birkenau. Rain and dark clouds part as he prays over the monument markers of those who were killed there to give way to the sun and a magnificent rainbow while Psalm 22 was being chanted, very moving. 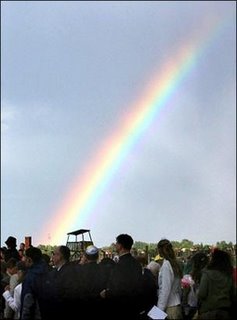 To speak in this place of horror, in this place where unprecedented mass crimes were committed against God and man, is almost impossible - and it is particularly difficult and troubling for a Christian, for a Pope from Germany. In a place like this, words fail; in the end, there can only be a dread silence - a silence which is itself a heartfelt cry to God: Why, Lord, did you remain silent? How could you tolerate all this? In silence, then, we bow our heads before the endless line of those who suffered and were put to death here; yet our silence becomes in turn a plea for forgiveness and reconciliation, a plea to the living God never to let this happen again.