How White Was My Savior? 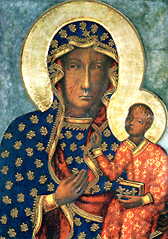 (Exhibit One to the right...)
A non-story in Newsweek:

The mainstreaming of a white Jesus began in earnest during the early Middle Ages in Europe, a time and place where darkness had a powerfully negative connotation. Eighth and ninth century European theologians, obsessed with the symbolism of the Passion, began ascribing blame to the Jews. As such, Judas and King Herod and eventually Pontius Pilate came to be represented in dark, sinister hues while Jesus became increasingly white. “The oldest basis of all Christian art is the clash of good versus evil, light versus dark,” said Colum Hourihane, director of the Index of Christian Art at Princeton University. “This was particularly the case in the ninth and tenth centuries, when basically the Jews assumed a dark coloration [in art] while Christ became radiantly white, illuminated.” This whiteness naturally extended to such secondary characters as Mary and Joseph and the disciples.