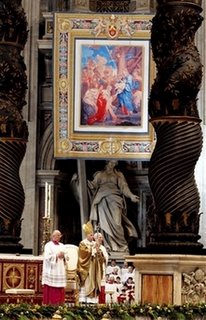 Feast of the Epiphany, from Asia News Italy:

Benedict XVI dwelt on some features of the Magi (of then and now), namely
humility and passion to seek truth rather than wealth and power. The pope said:
“They prostrated themselves before a simple baby in his mother’s arms not in the
setting of a royal palace but instead in the poverty of a shed in Bethlehem (cfr
Mt 2:11). How was it possible? What convinced the Magi that that boy was the
‘king of the Jews’? Certainly they were persuaded by the sign of the star, which
they saw ‘rising’ and which stopped right on top of the place where the Boy was
(cfr Mt 2:9). But even that star would not have been enough had the Magi not
been people intimately open to the truth. As opposed to King Herod, who was
taken up by his interests of power and wealth, the Magi were looking towards the
end of their quest and when they found it, although they were cultured men, they
behaved like the shepherds of Bethlehem: they recognized the sign and adored the
Boy, offering him precious and symbolic gifts that they brought with
them.”

The mystery of the Epiphany “contains a demanding and ever
present message” for Christians too, who often whittle their faith and witness
down to activism or sentimentalism. The pope said: “The Church, reflected in
Mary, is called to show Jesus to men, nothing else but Jesus. He is the All and
the Church does not exist other than to remain united in Him and to make Him
known to the world. May the Mother of the Word incarnate help us to be docile
disciples of her Son, Light to the nations.”