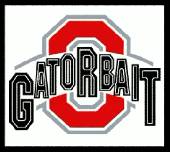 For all those who complained about Florida not having enough "style points" in their wins against a very tough SEC schedule--that includes a lot of rivalry games...well now you've got them and Florida could have given you a few more at the end of the game if you needed them.

Let's hope there is a playoff in NCAA in the future--so that teams that play weak schedules in big name conferences don't get all the glory--while teams like Boise State or Florida get bad mouthed by a bunch of no nothing sports writers and announcers.

Btw, Kurt (Herbstreit)now we know why you wanted a rematch so bad and why you thought Florida had no place playing your beloved Buckeyes! I'll bet reality bites!
Let's hear it also from the endless cries "does anyone think that Florida is the second best team in the country?" No, we think they are the best!

The question now must be raised after the bowls--does anyone think that Ohio State and Michigan were the two best teams in the country? Believe it or not I heard Tony Kornheiser say last night that he still thought the National Championship was played in November when Ohio State and Michigan played--is he Buckeye nuts?
Posted by Amy Welborn at 5:46 AM