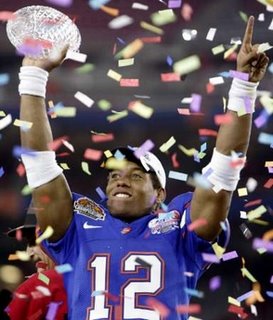 It's doubly great to be a Florida Gator.

This is the 100-year anniversary of Florida football, and wouldn't you know it: The Gators pulled off one of the most shocking upsets of the century. Exactly 10 years after winning their first national title with a rout of No. 1-ranked Florida State, the Gators destroyed another undefeated team a decade later.

Talk about validation and vindication, maybe now QB Chris Leak finally will get the credit he is due as one of the greatest quarterbacks in Florida and Southeastern Conference history.

From Mike Bianchi (the greatest sports columnist out there) of the Orlando Sentinel.
Posted by Amy Welborn at 6:27 PM