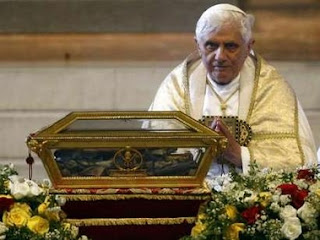 One wonders if the pope sees in his election as pope a similar path when he says this of Augustine's ordination "The beautiful dream of the contemplative life disappeared, Augustine's life fundamentally changed. Now he had to live with Christ for all." No Bavarian retreat to contemplate the truth, but a mission to share the truth to the world!

Benedict XVI illustrated Augustine's path to conversion, recalling the "three conversions" that the saint experienced, which "in fact were a single great conversion in seeking the face of Christ and then walking together with him."

"The first fundamental conversion was the interior road to Christianity, toward the 'yes' of faith and baptism," he explained. According to some historians, Augustine's baptism took place on Easter in 387.

Augustine "was always tormented by the question of truth. He wanted to find truth," the Holy Father explained.

"He always believed -- sometimes rather vaguely, sometimes more clearly -- that God exists and takes care of us," the Pontiff said. "But to truly know this God and Jesus Christ and come to say 'yes' to him with all the consequences this entails -- this was the great interior struggle of his youth.

"He tells us that, by means of Platonic philosophy, he accepted and recognized that 'in the beginning was the Word,' the Logos, creative reason. But philosophy did not show him any road to reach this Word; this Logos remained distant and intangible.

"Only in the faith of the Church did he find the second essential truth: The Word was made flesh. And in this way he touches us and we touch him."

Augustine's "second conversion" took place after his baptism in Hippo, in Africa; he founded a small monastery and by popular demand was ordained a priest by force, the Pope explained.

Benedict XVI continued: "The beautiful dream of the contemplative life disappeared, Augustine's life fundamentally changed. Now he had to live with Christ for all.

"He had to translate his knowledge and sublime thoughts into the thought and language of the simple folk of his city.

"The great philosophical work of a lifetime, which he had dreamed of, remained unwritten. In its place we were given the gift of something more precious: the Gospel translated into the language of daily life."

"This was the second conversion that this man, struggling and suffering, had to undergo," the Pope added. "He must always be there for everyone; always with Christ he must give his own life so that others might find Christ, the true Life."

St. Augustine's third conversion took place when he discovered that "only one is truly perfect and that the words of the Sermon on the Mount are completely realized only in one person: in Jesus Christ himself," the Holy Father said.

He added: "On the other hand, the whole Church -- all of us, including the apostles -- must pray every day: Forgive us our trespasses as we forgive those who trespass against us, St. Augustine wrote.

"And we make ourselves resemble Christ, the perfect one, to the greatest extent possible, when we become merciful persons like him."

Benedict XVI concluded with this exhortation: "In this hour let us thank God for the great light that radiates from the wisdom and humility of St. Augustine and let us pray to the Lord that he give all of us the necessary conversion each day and thus lead us to the true life."
Posted by Amy Welborn at 6:21 AM