In the Communion of Saints... 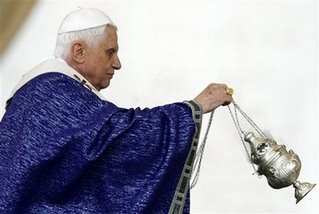 For a long time, he had been preparing himself for this last encounter with Jesus, as the different drafts of his testament show. During long hours in his private chapel, he spoke to Him, abandoning himself totally to His will, entrusting himself to Mary, repeating Totus tuus. Like His divine Master, He lived his agony in prayer.

On the last day of his life, eve of the Sunday of Divine Mercy, he asked to be read the Gospel of John. Assisted by those around him, he wanted to take part in all the prayers of the day and at the Liturgy of the Hours, to make Adoration, to meditate.

The perfume of the Pope's faith and hope and love filled his house, filled St. Peter's Square, filled the Church and spread throughout the whole world. He died praying. Truly, he went to sleep in the Lord. What happened after his death was - to believers - the effect of that fragrance that had reached everyone, near and far, and drew them towards a man whom God had progressively conformed to Christ.

And so we can apply to him the words of the first verse of the Servant of the Lord that we heard in the first Reading: "Here is my servant whom I uphold, my chosen one with whom I am pleased, upon whom I have put my Spirit; he shall bring forth justice to the nations,..."

Dear brothers and sistes, the Responsorial Psalm has given us words full of faith. In the communion of saints, we seem to hear the voice of of our beloved John Paul II, who from the house of the Father - we can be sure - does not cease to accompany the journey of this Church. "Wait for the Lord with courage; be stouthearted, and wait for the Lord. (Ps 26. 13-14).
Posted by Amy Welborn at 5:48 PM