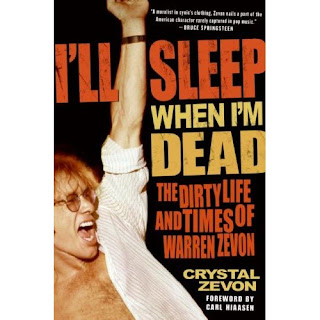 (Michael Dubruiel died less than 2 years after writing this post. See the sidebar on the right for more information.)


My introduction to Warren Zevon came in the early 1980's when I was in a record store in Gainesville, FL looking for a new album that had just came out (I don't remember what the album was). While in the store I was caught up with the album they were playing over the PA system..a singer was singing about being in Hawaii and abandoned by his girl to the "Hula, Hula" boys with a refrain in Hawain. It piqued my interest. I listened on to the next song which was about going to Memphis, Graceland to be exact and digging up the king and begging him to sing about those heavenly mansions Jesus mentioned and imagining him (Elvis) walking on the water with his diet pills.

Who was the artist? I asked the guy at the counter.

Which only recently has been made availble on CD. Thus I was introduced to Warren Zevon.

I became a big fan, there is something about a certian class of artists, usually more know for their songwriting than their singing that has always categorized my favorite singers. People as diverse as Tom T. Hall, David Alan Coe, John Prine, Matraca Berg, Neil Young, Neil Diamond and Warren Zevon have long been my favorites. In some ways Zevon was the most diverse of all of them. One minute you were apt to hear a classical string piece introducing some twangy anthem to "playing that dead band's song...all night long" (the dead band referring to another of my long time favorites Lynyrd Skynrd's "Sweet Home Alabama" the next some hard rocking tune. Zevon in many ways defies definition.

I'll Sleep When I'm Dead: The Dirty Life and Times of Warren Zevon

in some ways is just as quirky a biography as the singer was in life. When my copy first arrived I was disappointed, because it didn't seem like a biography at all, but rather a collection of interviews, journal entries, reminicences. But like the genius that the book is about, I soon found their was a genius to what Crystal Zevon (Warren's second ex-wife) had put together. Here is the gripping and moving tale of the real Warren Zevon told from every angle, by people who both loved and hated hiim. The details read like a life long confession--mostly of failures, but with glimmers of grace here and there. The stories behind many of the songs co-written by Warren Zevon are here and as this became my lunch time reading over the past month, I found myself going back and listening to the music from the different periods of his life.

I saw Warren perform live once, with Amy and a few friends at Clearwater Beach on the Fourth of July back in the 1990's. No band, just him in some bike shorts and his twelve string guitar belting out all the hits--no mention in the journal entries of that performance, but there are of many--many times revolving around the endless hook-ups with women that he had fleeting affairs with.

One of the most intriquing elements of the bio, that is very minor in the book but is there throughout his life is Zevon's fascination with the Catholic Church. In Spain he tries to convince then wife Crystal that they convert--she's reluctant, so nothing happens. Later when asked by someone what his religion he says, "Catholic." He attends Mass with a woman whom he sleeps with in the same apartment building, another time when troubled in Ireland he finds a Catholic Church and enters during Mass emerging afterwards and writing in his journal of the experience "Peace be with you" which seems to be something that eluded him throughout his life--hence the song title and book title "I"ll sleep when I'm dead." Perhaps the worst part of this flirtation with Catholicism happens when he is diagnosed with terminal cancer and given only three months to live and visits a Catholic priest with a friend only to be told that he does not have time enough to convert (for non-Catholics and Cathoilcs out there--this must be some reference to the RCIA process which normally takes about nine months to complete, but the priest was wrong to say this--but may not have understood the situation).

As a Warren Zevon fan I loved this book. As a Catholic I wished that Warren might have fell into the hands of a saintly priest or Catholic who might have given him the tools to redeem all of the demons that tormented his soul and kept him from committing to anything but death in his life. To paraphrase another author, we all are either living to sleep or sleeping to rise--unfortunately Warren was haunted by death (see the skulls that dominate his album art--complete with dangling cigarette), but somewhere in the midst of it all I think the grace that haunted him might have won out in the end.

Warning for the prudish--this book contains all the gore one might expect from someone involved in rock and roll--but in the midst there are glimmers of those heavenly mansion Jesus mentioned...