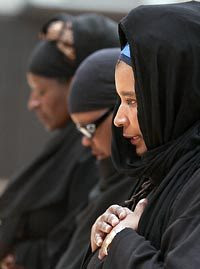 A veteran Episcopal priest says she became a Muslim just over a year ago and now worships at a mosque Fridays – but that hasn't stopped her from donning her white collar Sunday mornings.
"I am both Muslim and Christian, just like I'm both an American of African descent and a woman. I'm 100 percent both," Rev. Ann Holmes Redding told the Seattle Times.
Redding, a priest for more than 20 years, until recently was director of faith formation at St. Mark's Episcopal Cathedral in Seattle, the paper reported. Now, she's telling the world about her adherence to Islam, provoking bewilderment from Christians and Muslims.
Posted by Amy Welborn at 5:00 AM