The Moral Implications of Ecology 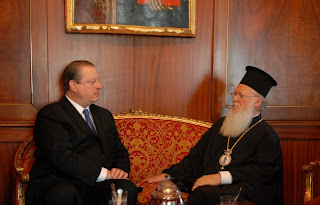 The Ecumenical Patriarch of Constantinople was also present at the conference. He was the first religious leader to have initiated since 1991 various events to promote environmental protection. This role was underlined by Gore, who made a personal visit to the Phanar to speak with Bartholomew whom he described as “the green patriarch” thanking him for his example to Christians and the world as a whole.

Gore then quote the Patriarch, saying “the imposition of modern society which is totally disinterested in human impact on the environment not only impedes sustainable development it is also un just”. (NT)
Posted by Amy Welborn at 5:10 AM