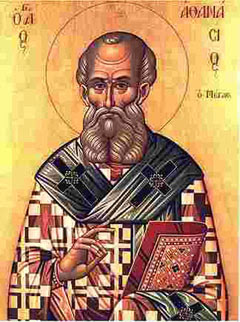 I watched it live on EWTN this morning at 5:00 a.m., no translation, so it was like being there.

From the Vatican Information Service:

Benedict XVI dedicated his catechesis during this morning's general audience to the figure of St. Athanasius of Alexandria (circa 300-373), calling him a "column of the Church," and a "model of orthodoxy in both East and West." Before the audience, which was held in the Paul VI Hall, the Pope visited the Vatican Basilica where he greeted faithful gathered there.

After noting how St. Athanasius' statue was placed by Bernini, alongside statues of other doctors of the Church (St. John Chrysostom, St. Ambrose and St. Augustine), around the cathedra of St. Peter in the apse of the Vatican Basilica, the Pope described the Alexandrian saint as a "passionate theologian of the incarnation of the 'Logos,' the Word of God," and "the most important and tenacious adversary of the Arian heresy which then threatened faith in Christ by minimizing His divinity, in keeping with a recurring historical tendency which is also evident in various ways today."

Athanasius participated in the Council of Nicaea, when bishops established "the symbol of faith ... which has remained in the tradition of the various Christian confessions and in the liturgy as the Nicene-Constantinopolitan Creed." There it is affirmed that "the Son is 'of one substance' with the Father, precisely in order to highlight His full divinity which was denied by the Arians. ... The fundamental idea behind St. Athanasius theological labors was precisely that God is accessible, ... and that though our communion with Christ we can truly unite ourselves to God."

Nonetheless, the Arian crisis did not end with the Council of Nicaea "and on five occasions over a period of 30 years, ... Athanasius [bishop of Alexandria from 328] was forced to abandon his city, spending 17 years in exile." In this way, however, "he was able to support and defend in the West ... the Nicene faith and the ideals of monasticism."

This saint's most famous work "is his treatise 'On the Incantation of the Word'," in which he affirms that the Word of God "was made man that we might be made God; and He manifested Himself by a body that we might receive the idea of the unseen Father; and He endured the insolence of men that we might inherit immortality."

Athanasius is also the author of meditations upon the Psalms and, above all, of one of the most popular works of ancient Christian literature, "the 'Life of St. Anthony,' the biography of St. Anthony Abbot which ... made a great contribution to the spread of monasticism in East and West."

The life of Athanasius, like that of St. Anthony, the Pope concluded, "shows us that 'those who draw near to God do not withdraw from men, but rather become truly close to them'."
Posted by Amy Welborn at 6:04 AM