Feast of Saint James the Apostle 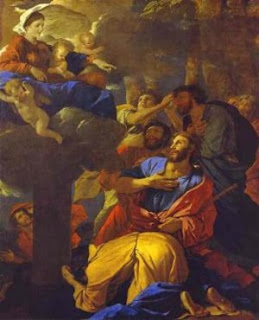 An Eye-Witness of the Transfiguration

When one considers that James was an eye–witness of the Transfiguration, the deeper meaning of today’s First Reading comes into focus. While James looked on, together with Peter and with his brother John, Jesus “was transfigured before them, and His face shone like the sun, and His garments became white as light” (Mt 17:2). The splendour of Jesus’ Face burned itself indelibly into the heart of James. Contemplating the Face of the transfigured Jesus, James was filled with “the light of the knowledge of the glory of God” (2 Cor 4:6). This is the treasure that Saint James carried in a shell of fragile earthenware: his own human weakness.

The Transfiguration reveals the treasure; the agony in the garden of Gethsemani reveals to us the fragility of the earthen vessels. To Peter, James, and John, Jesus said, “Remain here and watch with me” (Mt 26:38), but after His prayer to the Father, he found them sleeping. Again, a second time, He asked these, his intimate companions, to watch and pray, warning them of the weakness of the flesh, and again He came and “found them sleeping, for their eyes were heavy” (Mt 26:43). And so it happened a third time but, by then, the hour of Jesus’ betrayal was already at hand (Mt 26:45). The radiant memory of Jesus transfigured, “the knowledge of the glory of God” (2 Cor 4:6), was held in earthen vessels: in the hearts of men who could not watch even one hour with their Master in his agony.

Tradition recounts that after Pentecost Saint James went to preach the Gospel in far off Spain. There his work met with little response. In fact, the Apostle found hostility and active resistance to his preaching. James grew discouraged and, in his weariness, began to question his mission. In this, there is not a priest alive who, at certain moments, cannot identify with Saint James.

Also you can read what Pope Benedict XVI says about Saint James in: