Where I was Today 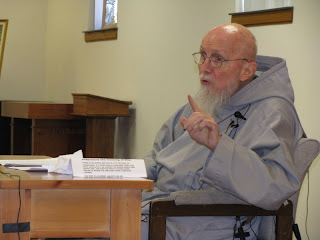 Sitting next to Tim Drake who wrote this in his excellent Pope 2008 blog (the picture also was taken by Tim):

Father Benedict Groeschel, co-founder of New York's Franciscan Friars of Renewal spoke to a group of approximately 150 priests, brothers, and nuns this morning at the Institute on Religious Life National Meeting being held in Chicago. The photo is from the talk. While the two-part talk focused on the damage that modern psychology has done to religious life, and the importance of virtue, Father Benedict did offer some interesting asides related to the Pope's upcoming visit.

First, according to Father Benedict, Cardinal Edward Egan asked that representatives from the religious community be on-hand at the airport when the Pope arrives in New York. I didn't obtain the exact numbers, but it sounded as if at least 20 priests and brothers and many sisters from the community will be there to greet the Pope. Imagine all that gray along with the Pope's white.

Secondly, while Father Benedict didn't delve into what he thought the Pope might say while he's here, he did have one thing to say about the Pope's address to Catholic educators and Catholic college and university presidents at Catholic University of America.

"He's not going to give them roses," said Father Groeschel.