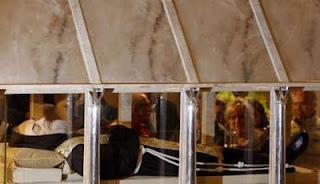 Remains are displayed, from the BBC:

The body of the popular Italian saint, Padre Pio, has gone on display in a glass coffin in southern Italy.

Padre Pio was said to have had stigmata, or bleeding wounds of Jesus, on his hands and feet.

His body was exhumed in March on the 40th anniversary of his death. He was canonised by Pope John Paul II in 2002.

More than a million people are expected this year to see his body, which is said to be well-preserved. But there is reportedly no sign of the stigmata.