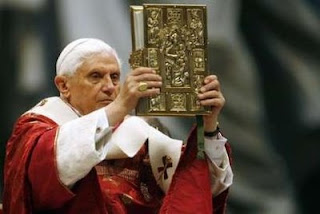 
The group of disciples that receives the Holy Spirit is the "new Israel", a "new creation", which speaks in "other languages". It is a community "constructed not by human will, but by the power of the Spirit of God . . . a community that at the same time is one and universal".

"The Church that is born at Pentecost", Benedict XVI further explains, "is not in the first place a particular community - the Church of Jerusalem - but the universal Church, which speaks the languages of all peoples. From this are then born communities in every part of the world, particular Churches that are all and always actualisations of the only and unique Church of Christ". In the ecumenical world and in some fringes of the Catholic Church, the preeminence of the particular Church is often emphasised, looking to the unity of the Church (and the pope) as a sort of optional association, a federation constituted externally. "The Catholic Church", the pope adds, "is not . . . a federation of Churches, but a unique reality: ontological priority belongs to the universal Church. Without being Catholic in this sense, a community would not even be a Church".

In the "federalist" view of the Church, Catholics are called "Roman" in order to limit the universality of this Church. Benedict XVI explains that the Rome cited in the Acts of the Apostles "was the symbol of the pagan world in general", and that in the vision of Luke "the power of the Holy Spirit would guide the steps of the witnesses 'to the ends of the earth' (Acts 1:8), all the way to Rome". The "Roman" character of the Church is therefore another sign of catholicity and universality: "the journey of the word of God, begun in Jerusalem, reaches its destination, because Rome represents the entire world and thus embodies the Lucan idea of catholicity. The universal Church is realised, the Catholic Church".

The Church created by the Spirit has peace as its characteristic. Benedict XVI returned to the Gospel of today's Mass, which recalls the appearance of Jesus in the Cenacle, and the gift of "shalom" (peace) offered by the Risen One. "'Shalom' is not a simple greeting; it is much more: it is the gift of the peace that is promised (cf. John 14:27) and won by Jesus at the price of his blood, it is the fruit of his victory in the struggle against the spirit of evil. It is therefore a peace 'not as the world gives', but as only God can give".

This gift brings with it the responsibility to spread it in the world, among all peoples. The pontiff recalls his recent speech to the United Nations as a sign of this lived responsibility. "But", he adds, "one must not think only of these events 'at the top'. The Church realises its service to the peace of Christ above all in its ordinary presence and action among men, with the preaching of the Gospel and with the signs of love and mercy that accompany this (cf. Mark 16:20)".

The pope then cites one of the main signs: that of reconciliation, both as the sacrament of confession ("How important, and unfortunately not sufficiently understood, is the gift of Reconciliation, which pacifies hearts!") and as daily effort in society: "The peace of Christ is spread only through the renewed hearts of reconciled men and women who have been made servants of justice, ready to defend peace in the world solely with the power of truth, without descending to compromises with the mentality of the world, because the world cannot give the peace of Christ: this is how the Church can be the leaven of the reconciliation that comes from God".