In the Scriptures, a person is considered enslaved to the extent
that he or she is attached to anything that is not God. “No servant
can serve two masters,” Jesus says in Luke 16:13. “Either he
will hate the one and love the other, or he will be devoted to the
one and despise the other. You cannot serve God and mammon.”
When God is not master of a person’s life, other forces are
free to enslave him. A Christian must be especially careful not to
become encumbered by lesser “gods,” knowing the price Jesus
paid to set us free from the bondage of sin. In the passage quoted
above from the book of Romans, St. Paul speaks of the horrible
effects of this enslavement. Wretched man that I am! Who will
deliver me from this body of death?

Inevitably, the way of bondage is the way of death. However,
even at the moment of death, the liberation of the cross is possible.
Two men were crucified with Christ, one on each side of
him (the seats that James and John requested). Both prisoners
were guilty of the crimes for which they were being executed.
However, one admitted his guilt; from his cross, Jesus assured
that thief that they would soon be in paradise.

The Woman at the Well

When Jesus came to the Samaritan woman at the well, he asked
her for a drink. When our Lord comes to us, he often asks something
of us, too, even when he has an abundance to give us. The
asking simply makes us recognize our inability to fulfill our own
needs by any means other than him.

The procession of the cross that begins and ends each celebration
of the Eucharist should help us to redefine our lives whenever we
witness it. As the Mass begins we join all of our crosses to the
cross of Christ, asking the Lord to have mercy upon us for our
inability to see. We listen to the Scriptures to once again learn
about all the necessary events of our lives, proclaim the Church’s
belief as our own, and give thanks to God as we offer the sacri-


fice that he has provided for us. We then receive the Living God
before the cross leads us back into the world!

Having received the life of Christ in us, we are better able to

extend that love to others. I was reminded of this again a few

years ago, when I met another family who also had an unplanned
child. In the presence of the child they said what a gift they had
been given—like nothing they could have ever dreamed of asking
for, an incredible blessing. Their joy mirrored that of God the
Father, who could not contain himself in heaven when his Son
walked the earth. He opened up the heavens to exclaim, “This
is my beloved Son, with whom I am well pleased” (Matthew
3:17).

That same Son would experience horrible suffering at the
hands of cruel men. Assured of the love of the Father, he knew
that ultimately the Father would not let him down. When you
and I are finally convinced in the same way that God loves us,
we will welcome whatever comes our way in this life and see it
with a vision that others will marvel at. On that day we will say,
“Alleluia. Praised be God!”

Start the New Year with Confession

For a brief, pointed and helpful guide, 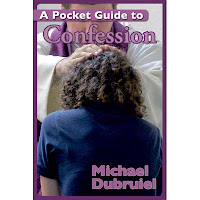 All of Michael Dubruiel's books listed on Amazon.

The Power of the Cross free download and audio files.

The New Version of the Stations of the Cross link
Posted by Amy Welborn at 6:03 AM