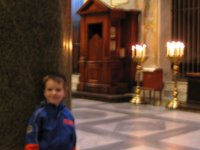 We arrived a few minutes before we were scheduled to meet Charlie Collins of Vatican Radio and his esteemed group for lunch at the fountain in the Piazza di Santa Maria in Trastevere, so I decided to take a look in at Santa Maria's, just as I opened the door Charlie was walking out...so we went back with the rest of the family by the garden and took a quick tour of the Vatican's Pontifical Council buildings, residences and offices. Then to the restaurant where we were joined by:

Franciscan of the Holy Land Father David-Maria Jaeger, O.F.M., J.C.D., who currently is on the faculty of the Pontifical Athenaeum "Antonianum" in Rome, and is a member of the Delegation of the Holy See on the Bilateral Permanent Working Commission between the Holy See and the State of Israel. Father Jaeger was born of Jewish parents in Israel. He converted to Chrisianity and became a Catholic priest in 1986. He received his Doctorate in Canon Law (J.C.D.) in 1989.

Legionarie of Christ Father Kevin Lixey Head of Office for Church and Sport, the Pontifical Council for the Laity, fresh from the Winter Olympics in Turin or Torino.

Kishore Jayabalan formerly with the Pontifical Council for Justice and Peace, now the head of the Rome office of The Acton Institute and a fellow blogger.

Elizabeth Lev who teaches Christian art and architecture at Duquesne University’s Rome campus, gives great tours at the Vatican's museums and also does interviews for Zenit among other organizations including Our Sunday Visitor.

Opus Dei Father John Wauck, originally from Chicago, Harvard grad and former speech writer for Governor Casey, brother-in-law of FBI spy Robert Hanssen, blogger, and a priest teaching at the Pontifical University of Santa Croce in Rome and host of an EWTN show Mirror of the Soul.

A great crowd who greatly educated us in many matters of life in the Church in the Vatican. What a joy it was today (March 12th) back in the states to see a story on Rome Reports that featured Father Jaeger, immediately bringing to mind the excellent afternoon of conversation we enjoyed.
This was also our only real Italian meal with all the courses and a little wine to go with it--after all it was Fat Tuesday!
When it was all over we parted ways and Charlie took us into Santa Maria Trastevere, one of the most beautiful churches. Here again are the perfunctory blurry pictures: 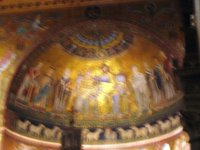 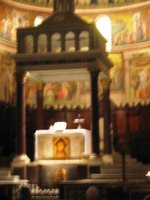 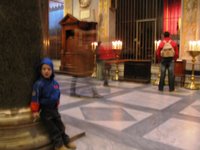 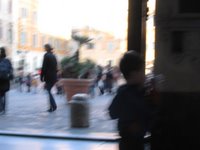 This final image didn't come out very good, which is a shame it was Joseph catcing sight of many costumed children in the piazza outside of Sant Maria's--it was Carnivale and he didn't quite know what to make of it.
Charlie walked us out of Trastevere, across the Tiber to where we could catch a bus back to St. Peter's. Once we arrived back we made the perfunctory check of email at the Internet cafe, picked up some milk and water and headed back to the apartment to get ready for the evening visit with the American students from St. Thomas in MN who are studying in Rome.
Posted by Amy Welborn at 5:20 PM