Slowly getting around to this...

After a quick trip to find a baby bottle, and our first discovery that hardly anyone in the shops surrounding our apartment spoke any English we stopped in at a nearby bar (which in Rome really means coffee shop) for lunch. Sadly, the food was microwaved and I suppose from a frozen dinner but we were so tired that it probably didn't matter that much that first day. Back to the apartment the kids and I took a nap, while Amy went out to try to make a phone call and fulfill an interview at Vatican Radio she had set up with Charley Collins.

When Amy returned she told us that Charley had agreed to meet us in front of Vatican Radio to take us on a little "get aquainted" with our part of Rome tour. We met him just in time to find that two of his fellow employees were heading out to catch the express bus so that they could have dinner at the Hard Rock Cafe in Rome.

We then proceeded the first of what I would later term a "death march" lugging the baby Michael on my back and walking on the uneven Roman pavements for what seemed like hours upon hours. We walked past the Castle San Angelo, across the Tiber River and toward Piazza Navona. As we walked Charley would point out sites along the way, including restaraunts and whether they were good or bad. When we finally arrived at the Piazza Novona he pointed out a church that we could only see the dome of from where we were and said that it contained the best incorrupt body in all of Rome, "why you can see the stubble of his beard." We later checked out this Church and prayed at the tomb (and I thought his name was Cardinal Tommassi? but I can't find any reference to him...does anyone know who this is?): 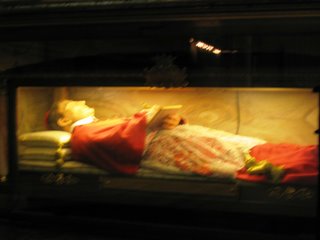 As we walked back without Charley, we stopped and ate at one of the restaruants and had a great meal, followed by the kids getting gelato at another place Charley had recommended.

Evening came, the First Day.
Posted by Amy Welborn at 11:08 AM