Where 'Ratzinger" Was a Swear Word 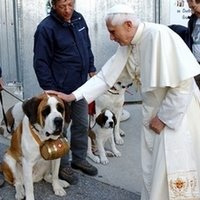 As I tell people I'm planning to write a book "Where Ratzinger Was a Swear Word" they share with me their own experiences, and I'd like to start sharing them here. I'd also invite readers to email me their own experiences with the caveat that in doing so they are giving me permission to use them in the book insuring of course their anonymity.

When the rector of a major U.S. seminary invited then Cardinal Ratzinger to be the ordaining prelate for that year's class of deacons, he told me that three diocesan vocational directors promptly notified him that they would be pulling out all of their seminarians from the seminary the following semester. I asked him if they followed through on their threat and he replied, "They did."
Posted by Amy Welborn at 5:11 AM