Where "Ratzinger" was a Swear Word 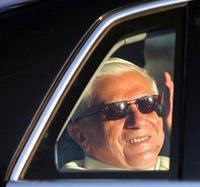 As I tell people I'm planning to write a book "Where Ratzinger Was a Swear Word" they share with me their own experiences, and I'd like to start sharing them here. I'd also invite readers to email me their own experiences with the caveat that in doing so they are giving me permission to use them in the book insuring of course their anonymity. - Michael Dubruiel

From a Campus Minister who is faithful, charismatic and was shocked the first time he attended a national conference of campus ministers and at Mass witnessed a priest shadowed by a woman who repeated everything he said as he said Mass. He wasn't terribly thrilled when Sister Minus Mary got up and invoked the four winds in imitation of the Native Americans she was sent as a missionary to and they evidently succeeded in converting her. But the relevant point to my story came when the campus ministers: clerical, religious and lay gathered for a small group session and brainstormed what they would do if they could be pope for one day.

My friend said that in his group there was a nun, two priests and himself. The nun spoke up first and she had only three words to say as to what she would do if she were the Supreme Pontiff and she said them loud enough for the adjacent groups to hear, "I'd fire Ratzinger." The two priests nodded approvingly. One of the priests spoke up next, "I'd make the church more gay-friendly, more inclusive." My friend wondered what he had gotten himself into.
Posted by Amy Welborn at 8:49 AM