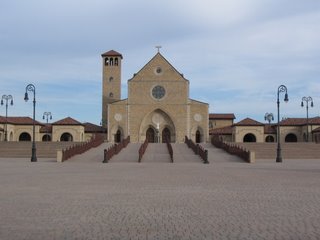 My picture on the right from my visit to Mother Angelica's Blessed Sacrament Monastery last January...
From Ventura County Star:

Twenty-five years ago, Mother Mary Angelica had a vision for Eternal Word Television Network, a channel offering nothing but Roman Catholic programming. She had little more than faith, $200 and a garage to use as a studio.

Now EWTN Global Catholic Network is available in 127 countries and more than 118 million households, and is capping a celebration of its founding in 1981. With viewers from Illinois to India, the satellite channel has grown to include radio and the Internet, and bills itself as the largest religious media network in the world.