Pro's and Con's of the Indianapolis Motor Speedway 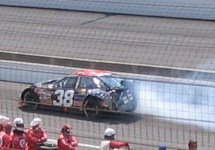 Great ticket system. If you have a will-call ticket, you can go to any ticket venue at the site and when the venue is 2 1/5 miles around this is a life saver. There they take your info and print out your ticket in a few seconds--excellent service.

Good parking. I consistently am able to park within a 1/4 mile of one of the entrances and pay $10, compare that to parking about 3/4 of a mile from Daytona and paying $40. 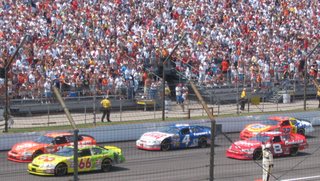 Easy in and Easy out. Again I encountered no traffic coming in or leaving--but then I am not a sheep and do not park or drive where everyone else does. But again in contrast to Daytona (where the shortcuts I used to know, now are apparently known by everyone) it took close to two hours to even begin to move.

Civilized Crowd. This is Indiana and apart from the three idiots--two women who did rebel yells as loud as they could toward each other throughout the race, and the fat 30+ year old guy who didn't know anything about NASCAR but kept yelling all the lines from Talladega Nights that he learned-- for the most part you're dealing with a classier crowd than you are at Michigan or Daytona (I've had a similar experience at Atlanta--classier crowd--but it could be that it was 35 degrees on the day of the race).

Great Soundsystem. Indy is about the only track I've ever been to where you can actually hear the announcer during the race.

Lousy Concession Stands. Usual crap food, long lines and stragegically place about an 1/8 of mile between stands. If want a grilled chicken sandwich, you are out of luck. I did get an excellent cob of sweet corn though in the infield (with no line). This actually is something that most NASCAR tracks have in common, I'm trying hard to think of any track I've been to that had anything like what you can find at most baseball stadiums now. 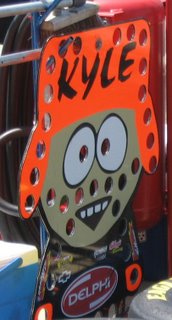 Lousy Racing. The thing about Indy is once the race starts the show is over. I used to think that the Indy 500 was boring because no one passed--but if NASCAR only raced at tracks like Indy and not at Daytona, Talladega and Bristol it would soon have very few fans. Watching one lap of racing followed by 90 laps of follow the leader is not all that exciting to watch in 90 degree, sun in your face with the rebel yell screaming broads behind you. Here's my take--bank the turns like Daytona--then you can build stands all the way around the track because then you'll actually have a competitive race.
Posted by Amy Welborn at 5:35 AM