The Pope in the News 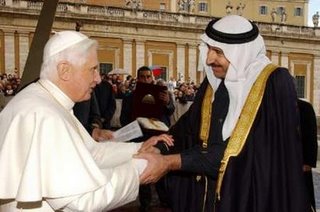 Condom Use in the News Again

The Ghosts of Past Pope's Haunts Papal Trip to Turkey which includes this:

"My readers were, for the most part, very supportive and pleased with what Benedict said in Regensburg," said Amy Welborn, who runs the popular US Catholic blog Open Book.

They also appreciated his call to Western Christians to reject a narrow, modern version of reason that he said shuts out faith and strips away the ethical foundations of society itself.

"They would like to see more Muslims have the same attitude toward their own faith, and particularly how that faith is lived out in the modern world," she said.

It should be noted that Ms. Welborn's husband lived in Turkey for one year of his life and frequently joined Muslims in a cup of chai (tea) and was edified by their fidelity to their beliefs. "In the Muslim's faithfulness, we can see how far we have become secularized in our beliefs," he said. (Not in the story but pertinent.)

Calendar Goes on Sale in Italy

The Brits: Pope Questions his Infallibility (about the Jesus book--and obviously reflecting total ignorance on what infallibility is)

Anti-pope protest planned for Istanbul this Sunday
Posted by Amy Welborn at 6:24 AM