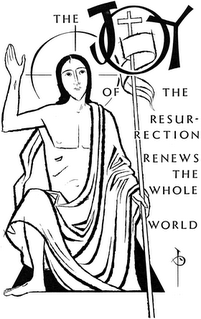 You may not recognize the name, but if you are Catholic, you know the artist that he was--there is no American Catholic, whose art dominated the post-Vatican II church more (in the U.S.) than Brother Placid's...

Brother Placid began full time work at the Liturgical Press around 1965 as its primary illustrator. He designed layout and jackets for dozens of books, and produced hundreds of illustrations. His work appeared in the Bible and Liturgy Bulletin for 41 years. He spent 1970 on assignment in Puerto Rico while continuing to work for Liturgical Press by mail. Brother Placid employed a wide variety of media that included pen and wash, collage, watercolor, welded metal, wooden sculpture and photography.

After the Second Vatican Council, he accepted invitations from many parishes in the Upper Midwest to serve as a liturgical consultant. Parishes were renovating church sanctuaries and their furnishings. For eleven years he also provided art once a month for the diocesan newspaper, The St. Cloud Visitor.

Besides his time at Layton School of Art, Brother Placid also studied at the University of Notre Dame, the Blackhawk Mountain School of Art in Colorado, and the Sagrada Art Studio in Albuquerque. In 1974, at the Instituto San Miquel de Allende in Guanajusto, Mexico, he created depictions of St. Francis of Rome and St. Augustine of Hippo for chapels on the lower level of the Abbey Church.

Some of Brother Placid's more visible works include "The Four Evangelists," a metal sculpture on the façade of Liturgical Press, and the road signs on old Highway 52 that formerly greeted visitors to the university, prep school, and abbey.
Posted by Amy Welborn at 6:18 AM