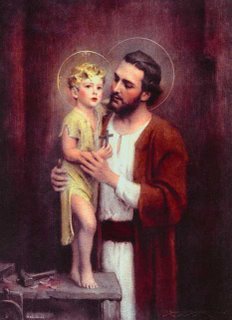 From a homily by Pope John Paul II:

Today we contemplate Joseph, husband of the Blessed Virgin, protector of the Incarnate Word, a man of daily work, steward of the great mystery of salvation.
It is precisely this last aspect which is given great emphasis in the biblical readings proclaimed a few moments ago, which explain to us how God involved St Joseph in the saving plan of the Incarnation. “God so loved the world that he gave his only Son, that whoever believes in him should not perish but have eternal life” (Jn 3:16). This is the incomparable gift of salvation; this is the work of Redemption.
Like Mary, Joseph also believed in the Lord’s word and came to share in it. Like Mary, he believed that this divine plan would be fulfilled through their willing co-operation. And this is what happened: the eternal Son of God became man in the Virgin Mother’s womb.
About Jesus — a newborn, then a boy, an adolescent, a young man, a mature adult — the eternal Father spoke the words of prophetic announcement which we heard in the first reading: “I will be his father, and he shall be my son” (cf. 2 Sm 7:14). In the eyes of those living in Bethlehem, Nazareth and Jerusalem, Joseph was Jesus’ father. And the carpenter of Nazareth realizes that in a way this is so. He knows it, because he believes in the fatherhood of God and is aware of being called, to a certain extent, to share in it (cf. Eph 3:14-15). And today the Church, in venerating St Joseph, praises his faith and total docility to the divine will.

On the occaision of the Episcopal ordination of Msgrs. James Harvey, Stanislaus Dziwisz and Piero Marini on March 19, 1998.
Posted by Amy Welborn at 11:00 PM