Excerpt From Jesus of Nazareth 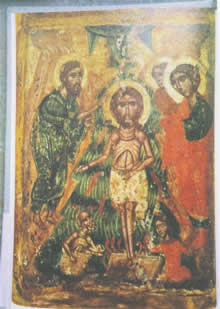 In Newsweek, here's a taste:

The Eastern Church has further developed and deepened this understanding of Jesus’ Baptism in her liturgy and in her theology of icons. She sees a deep connection between the content of the feast of Epiphany (the heavenly voice proclaiming Jesus to be the Son of God: for the East the Epiphany is the day of the Baptism) and Easter. She sees Jesus’ remark to John that “it is fitting for us to fulfill all righteousness” (Mt 3:15) as the anticipation of his prayer to the Father in Gethsemane: “My Father ... not as I will, but as thou wilt” (Mt 26:39). The liturgical hymns for January 3 correspond to those for Wednesday in Holy Week; the hymns for January 4 to those for Holy Thursday; the hymns for January 5 to those for Good Friday and Holy Saturday.
These correspondences are picked up by the iconographic tradition. The icon of Jesus’ Baptism depicts the water as a liquid tomb having the form of a dark cavern, which is in turn the iconographic sign of Hades, the underworld, or hell. Jesus’ descent into this watery tomb, into this inferno that envelops him from every side, is thus an anticipation of his act of descending into the underworld: “When he went down into the waters, he bound the strong man” (cf. Lk 11:22), says Cyril of Jerusalem. John Chrysostom writes: “Going down into the water and emerging again are the image of the descent into hell and the Resurrection.” The troparia of the Byzantine Liturgy add yet another symbolic connection: “The Jordan was turned back by Elisha’s coat, and the waters were divided leaving a dry path. This is a true image of Baptism by which we pass through life” (Evdokimov, The Art of the Icon, p. 296).
Jesus’ Baptism, then, is understood as a repetition of the whole of history, which both recapitulates the past and anticipates the future. His entering into the sin of others is a descent into the “inferno.” But he does not descend merely in the role of a spectator, as in Dante’s Inferno. Rather, he goes down in the role of one whose suffering—with—others is a transforming suffering that turns the underworld around, knocking down and flinging open the gates of the abyss. His Baptism is a descent into the house of the evil one, combat with the “strong man” (cf. Lk 11:22) who holds men captive (and the truth is that we are all very much captive to powers that anonymously manipulate us!). Throughout all its history, the world is powerless to defeat the “strong man”; he is overcome and bound by one yet stronger, who, because of his equality with God, can take upon himself all the sin of the world and then suffers it through to the end—omitting nothing on the downward path into identity with the fallen. This struggle is the “conversion” of being that brings it into a new condition, that prepares a new heaven and a new earth. Looked at from this angle, the sacrament of Baptism appears as the gift of participation in Jesus’ world—transforming struggle in the conversion of life that took place in his descent and ascent.