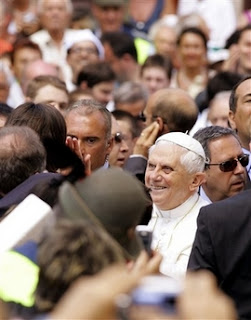 Perhaps a hint of the encyclical he is working on?

“Never again war!”: from the mountains of Cadore, a place of great natural beauty that was transformed into a theatre of slaughter during the First World War, Benedict XVI launched an appeal that the path of peace and dialogue be chosen above conflict. The mountains around Lorenzago where the Pope is spending his vacation this year, still bear the scares of trenches and dig outs, built by the soldiers of the war. Recalling that “Great War” and the appeal launched by Benedict XVI, who in 1917 asked the world to stop the “senseless slaughter”, the Pope dedicated the words pronounced before the Angelus prayer in Piazza Calvi, of Lorenzago di Cadore, to the value of peace.

There to hear his words, among the festive crowds of faithful and tourists, was also the Patriarch of Venice, Cardinal Angelo Scola, the bishop of Hong Kong, Cardinal Joseph Zen Ze-kiun, who had travelled to Cadore with a group of deacons and their families, the president of the Italian bishops conference, Msgr. Angelo Bagnasco, the bishop of Belluno-Feltre, Msgr. Giuseppe Andrich, the bishop of Treviso, Msgr. Andrea Bruno Mazzocato, Edoardo Luciani, brother of John Paul I – whom the Pope described as “my great friend” - and representatives of the lay associations from the diocese of Belluno-Feltre, whom he greeted after the Marian prayer.

“In these days of rest, - said the Pope - I feel even more intensely the painful impact of the news I receive about bloody conflicts and violent events happening in so many parts of the world. This leads me to reflect once again on the dramatic situation of human freedom in the world. The beauty of nature reminds us that we were instructed by God to cultivate and keep this garden that is the earth (Gen 2, 8-17). If men lived in peace with God and with each other, the earth really would look like a 'heaven'”.

“Unfortunately sin has ruined this divine project – continued Benedict XVI – generating division and allowing death to enter this world. Thus men by succumbing to the temptations of Evil, make war with each other. The consequence is that in this stupendous garden which is the world, there is now room for hell. War, with its after effects of destruction and death, has always been rightly considered a calamity which contrasts God’s project, who created everything to give life and who wants to make mankind one family”.

The Pope therefore re-evoked the appeal launched by Benedict XV 90 years ago on August 1st 1917, when he asked the nations at war to put an end to that inhuman conflict which he had the courage to define as a “senseless slaughter”. “This expression of his – continued the Pope – is carved into history. It was justified by the concrete situation of the summer of 1917, especially by what was taking place on this North Italian front. But those words ‘senseless slaughter’, contain a greater more prophetic value and can be applied to the many other conflicts which have cruelly broken countless lives. This very land were we find ourselves, which emanates peace and harmony, was a theatre of the First World War, as many testimonies and some moving Alpine songs still recall today. These events must not be forgotten! We must treasure the negative experiences which our fathers unfortunately had to suffer, so they will never happen again. Pope Benedict XV’s Nota did not limit itself to condemning the war; it also indicated, along juridical lines, the ways to build a just and lasting peace: the moral force of law, balanced and controlled disarmament, arbitration in controversy, the freedom of the seas, the reciprocal remission of war costs, the restitution of seized lands and fair negotiations to resolve outstanding issues”.

“The Holy See proposal was directed towards the future of Europe and of the world, according to a project inspired by Christianity, but open to all because founded on the rights of the people. It is the same imposition which the Servants of God Paul Vi and John Paul II followed in their memorable addresses to the United Nations Assembly, repeating in the name of the Church: ‘Never again war!’. From this place of peace, in which the horrors of ‘senseless slaughter’ are amplified’, – ha concluded the Pope – I renew my appeal to tenaciously pursue the rule of law, to refute with determination any recourse to arms and the temptation to apply old systems to new realities”.

Then from the wire services as taken here from Forbes:

Pope Benedict XVI called Sunday for an end to all wars, saying they were "useless slaughters" that bring hell to paradise on Earth.

Benedict made the appeal in this small mountain town in Italy's Veneto region while on vacation. He recalled that 90 years ago - on Aug. 1, 1917 - predecessor Pope Benedict XV urged a similar end to the first World War, then ravaging this part of northern Italy.

"While this inhuman conflict raged, the pope had the courage to affirm that it was a 'useless slaughter,'" Benedict said. "These words - 'useless slaughter' - contained a fuller prophetic value that can be applied to so many other conflicts that have cut off countless human lives."

Benedict didn't cite any conflicts in particular in his comments to several hundred faithful gathered in the main piazza of Lorenzago di Cadore for his traditional Sunday blessing. Rather, he made a general appeal.

"From this place of peace, where one still senses how unacceptable the horrors of 'useless slaughters' are, I renew the appeal to pursue the path of rights, to strongly refuse the recourse to weapons and refuse to confront new situations with old systems," he said.

Notice the avoidance of real reporting in the second, while the search for a sensational headline.
Posted by Amy Welborn at 6:03 AM