The Rosary with the Fathers of the Church 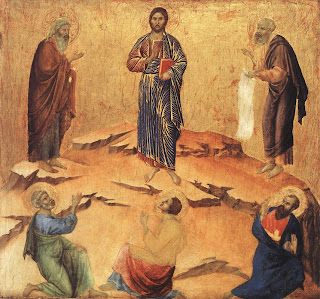 You may know that Peter, James and John did not taste death and were worthy to see the glory of the resurrection. It says, "about eight days after these words, He took those three alone and led them onto the mountain." Why is it that he says, "eight days after these words"? He that hears the words of Christ and believes will see the glory of Christ at the time of the resurrection. The resurrection happened on the eight day, and most of the psalms were written "For the eighth". (cf. e.g., Ps 6:1; 12:1 LXX and Vulgate) It shows us that He said that he who because of the Word of God shall lose his own soul will save it, (Luke 9:24) since he renews his promises at the resurrection. (Matthew 16:25-27) But Matthew and Mark say that they were taken after six days. (Cf. Matthew 17:1; Mark 9:2) We may say that they were taken after six thousand years, because a thousand years in God’s sight are as one day. (Ps 89:4 LXX) We counted more than six thousand years. We prefer to understand six days as a symbol, because God created the works of the world in six days (Gen 2:1), so that we understand works through the time and the world through the works. [Exposition of the Gospel of Luke 7.6-7]
Posted by Amy Welborn at 5:24 AM