From February 2006, by Michael Dubruiel

On Saturday, February 25th we arrived in Rome. Our landlord was waiting for us at our apartment and did a quick run through of how everything in the ample dwelling functioned. One thing he forgot to tell us was how to operate the satelite television (which turned out to be a blessing for us).

Anxious to see St. Peter's we left our suitcases and headed in that direction, only two blocks away. My first thought as we stepped into the square was that it looked small. Its not small by any stretch of the imagination but it looks small in person. This was something that I experienced time and time again within St. Peter's and is a testament to how well the architects of this structure mastered proportionalism. Things are gigantic, but appear intimate.

Another surprise was the long line to enter the Church. It seemed like it would take hours to enter, but I said to everyone we didn't come here just to stand in the sqaure. We got in line and within a few minutes were near the front of the line. It moved quickly.

Walking into the church we were stopped (we actually had walked into the wrong entrance, I figured this out after the first day), it turned out we were in the line for the crypt where Pope John Paul II was recently buried. They were only letting a certian number of people go down at a time, so we waited a few minutes and looked at the Holy Year doors.

Finally we made our way into the crypt. We went through several rooms before arriving where the pope's are buried. We passed a niche where Pope Paul VI rests, Pope John Paul I's tomb is in the hall. There was a crowd around the spot where Pope John Paul II rests. I would visit this spot everyday of my time in Rome and pray for many who came to mind--it seemed quite natural to do so. 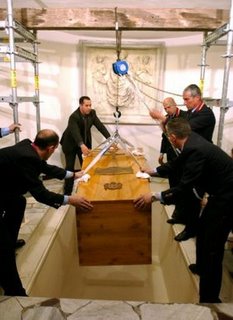 Flowers were scattered on the tomb, some pictures, some prayer requests. A guard moved everyone along, motioning to a space against the wall if someone wished to remain there in prayer.
Just past the tomb of John Paul is the center of St. Peter's--the tomb of the Apostle in the Confessio. I'm not sure if most of those walking through the Basilica understood this--most seemed to walk by without giving a glance behind the glass wall. The path took us right past other tombs and eventually outside of the church. We were a little (actually a lot) confused because we hadn't actually gone into the Basilica yet.
We went back up the stairs toward the front and through the central doors and this time entered the largest Church in the world. It looks so familar, yet to see it all at one time gave me a different view of the common site. The bodies of incorrupt popes under the many altars, the massive papal monuments that seem to jut out from the walls. It almost seemed to be too much!
Midway down the nave to the right was a curtianed room. Guards stopped the casual tourists from entering a space that a sign marked as being for prayer. With the baby strapped to my back, I went in. The others, I supposed were scared off by the guard and the sign.

Inside a number of people were praying before the Blessed Sacrament exposed in a monstrance. I gave thanks to God for a safe trip and that our feet had finally settled here in the center of his Church. My rambling went on when Michael (the baby) who had been very quiet spoke.

He said a word that I'd never heard him say before "Christ". It was very clear, and simple, and he only spoke it once. I said a few more prayers and he was silent, then I left the Chapel, emerging back into the nave of St. Peter's.

It was then that I started to wonder about his little confession of faith, made in Rome in the large church dedicated to St. Peter who had once been asked by Jesus, "Who do men say that I am?"..."Some say Elijah, some say John the Baptist,"..."But you, who do you say that I am?"..."You are the Christ!"

Peter's confession on the lips of my 15 month old son in the presence of Christ in the Blessed Sacrament, so began my time in Rome.
Posted by Amy Welborn at 4:30 AM