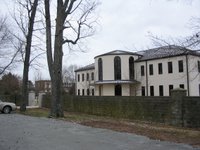 One time in the late 80's I was traveling with another friend of mine, Brian, on our way to Chicago. The first night we stopped at the Monastery of the Holy Spirit in Conyers, GA about twenty miles east of Atlanta.

Fr. Francis (originally a monk at Gethsemani and one of the founding monks of Holy Spirit, then in his 80's) met us at the Guest House door, "Will you stay?"

Anyone who has read Thomas Merton's Seven Storey Mountain knows this is what you expect to hear when you arrive at a Trappist monastery. There is a double meaning to the question..."Will you stay?" and join our community, "Will you stay?" in the guest house and finally since in the Rule of St. Benedict the stranger is to be welcomed as Christ...Will you stay? Lord as in "Stay with us Lord for the day is far spent."

We answered "yes" as in yes we'll stay in the guest house tonight, which we did and attended prayers and Mass--then left the next morning on our way to Gethsemani. We arrived in Gethsemani that afternoon (about seven hours later). No one greeted us or asked us if we would stay. There were a few other pilgrims wandering around but no monks visible. We were settled in the chapel for Vespers when the first monks began to emerge from the cloister and enter into the chapel. Brian leaned over to me and whispered, "Its the same guys."

Well not exactly. Driving toward Birmingham and away from Gethsemani I thought of my friend Peter who has been a big fan of the Trappists from way back. I knew that he had thought about entering the Monastery of Our Lady of the Holy Spirit at one timea and still made visits there frequently--I also knew that he had visited Gethsemani several times. His experience and mine of both monasteries knew that one welcomed strangers and the other saw them as an intrusion and to be fair because of Thomas Merton Gethsemani got a glut of strangers.

When I first stayed at Gethsemani the beds were very Trappist--really nothing more than a pallet with a two inch mattress on it. Years laters a beautiful, state of the art guest house was built that was more along the lines of mid range hotel. Now the Welcome Center--the times they are a changing.

I called Pete to share my views about the Welcome Center and I share them here because for the most part they were inaccurate as my return trip proved but they say a lot about how our minds process religious experiences. I told Pete:

"The first thing you notice when you walk in through the cloister wall and into the building is a coffin...it is open but empty. In some ways it is symbolic of immediately reminding you of your final end and asking you the question what am I here for? Several monks were available to answer the question." 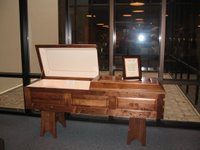 "Over the PA system there was an incessant crackling of flames--they made me think of the flames of Hell (another of the Last Things), when in fact a peak into the room to the left of the entrance showed that it was the Easter Fire being prepared and the flames providing the fire to illuminate the Easter Candle--symbolic of the light of Christ illuminating the darkness. The video featured the changing seasons...the crackling flames were replaced with crackling dead leaves falling from the trees surrounding the monastery, the barren trees introduced the funeral of a monk with living monks keeping vigil reading the psalms all night before the burial of their brother."

I told Pete that all of this left me with the impression that the Welcome Center was designed as a sort of funeral parlor and that unconsciously the monks were providing the guest with a modern morality play that the visitor was the staring player. Walking out of the Welcome Center I made my way toward the Chapel for Vespers--passing by another gate where the words "God Alone" were engraved. Long time readers of this blog will remember that this gate once graced the right hand column of this blog...the Gospel in two words, a reminder that after death all that matters will be God Alone...a reminder that in this life ultimately what matters is God Alone.

Then the Chapel and monks bending in unison at the waist singing "Praise to the Father, the Son and Holy Spirit both now and forever, until the end of the ages." punctuating the Psalms of praise and thanksgiving.

Death, Hell, Purgatory and Heaven all in a few minutes of each other. "Will you stay?"

No, not here anyway.

(Later my return to Getsemani later in the week and a more accurate description of the Welcome Center).