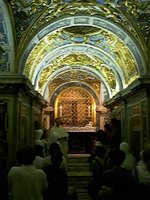 
If you've been on the "scavi" tour underneath St. Peter's you know that it ends up here, at the Clementine Chapel.This chapel is directly behind the "confessio" and is also called "St. Peter's Chapel" since it is very close to where the bones of St. Peter are located. On my early morning visit to St. Peter's this morning it happened that Mass was being celebrated here in the Clementine Chapel in English by five American priests. I joined them.
At the end of the Mass several of the priests introduced themselves, the celebrant was from Baltimore and was also a Knight of Malta, another priest on hearing that I was from Indiana mentioned that he also was in fact a Holy Cross priest from Notre Dame. Several others were pointing under the altar and making references to the "scavi" tour (which I hadn't taken as yet, but in fact would be taking later this same morning). 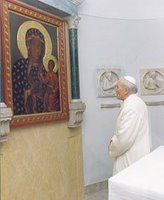