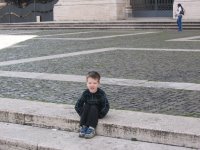 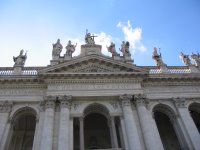 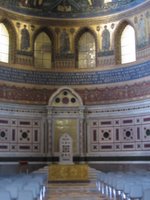 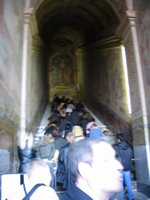 Around the other side of the Holy Stairs was the remains of the Papal dining hall and an impressive mosaic, as we were viewing this site a woman begging rather aggressively started coming at us, and we moved on toward the Church in the distance...St. Mary Major.
Walking along Zadok shared his knowledge of another area of his expertise the Irish Catholic Church begining with the Irish College, its history and various locations. We talked about the contributions the Irish priests had made to the world at large, Africa in particular and the United States (anyone who lives in the South knows the debt the Catholic Church owes to the Irish priests). What a marvel that where the Church is most vibrant right now is where the Irish planted the Faith. Pray for the Catholics in Ireland.
At this point I became very tired, I think the baby might have fallen asleep on my back and as we learned this made him very heavy. So we stopped and Zadok, Amy, Katie and Joseph had gelato. I sat.
Then up and at it again. A short visit into the Redemptorist Church where the original Our Lady of Perpetual Help is enshrined--a modern enshrinement, simple and I must say not much to my liking. Mass was being said so we weren't able to really get close.
Next to Saint Prassede, a very interesting Church decorated in a more Byzantine style with beautiful mosaics. This church contained the column that Christ was bound to when he was scourged.
Evening was falling as we arrived at Saint Mary Majors, built on the spot where snow fell one August after Pope Liberius had dreamed that this would be a sign for him to build a church dedicated to Our Lady. As we entered the Church, the chanting of Vespers could be heard. My back was aching from the baby on it and I stole away from our tour to go into the side chapel and join in the praying of Evening Prayer. I grabbed a book and went to the first empty seat I could find which was in the front where I sat next to Cardinal Bernard Law. In spite of the comotion that I created, he did not even seem to notice. I fumbled around in the book trying to locate the point the prayer was at, but to little avail and after about five minutes Michael the baby decided to join in speaking loudly his own version of chant--at which point I made my exit. We toured the church and then started making our way back to the Metro station, thanking Zadok for his time and well presented tour.
When we arrived back on Borgo Vitorio we stopped at a restaurant that Amy had spied the evening before. It was in the cellar and proved to be an excellent choice. We had a meal where everyone had what they wanted, for me it was a pasta with cheese and pepper and it was great,Joseph had a cheese pizzza, Katie a giant calzone, Amy another pasta dish, the baby had some of it all.
Evening came, the second day.
Posted by Amy Welborn at 5:30 AM